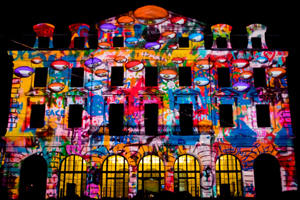 Odysseus is a free and modern reinterpretation of Homer's ancient greek poem, the Odyssey. The project tells with poetry, dynamism and humor the story of a pictogram (Odysseus) lost in fantastic universes. The project's scenes are derived from the universal symbols carried by the original work. On a rhythmic soundtrack mixing Hip-Hop & Electronic musics, Odysseus draws its aesthetic inspiration in the Street Art movement and also in the contemporary imagery of this century (Digital-Art, video games, comics).